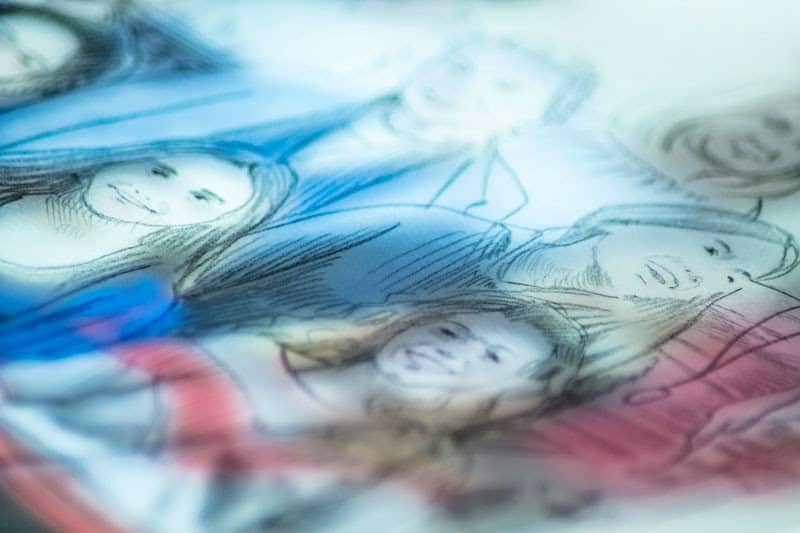 A photographic narrative by Riccardo Lorenzi on Adriano Olivetti and Michelangelo Pistoletto.

Nothing is ever as it seems. And so, something seen or glimpsed, in a picture, is but an enigma.

Morphè. Act of birth and rebirth. Origin and debut. Seed and flower, primal sense of coming into being. Gesture of wonder and dream.
Genesis of an imagined body in perception, story of flowing sap. Suffused declining into semblance, sweet and unconscious conjugation. Taking direction, relationship, form.

Irene Vergni, a young photographer from Sansepolcro, has been interested in photography for many years; the scope of her research is the analysis of the human state of mind.

event linked to the performance “Ssshh…”

The pop-up book has been a recurring element in the theatrical research of I Sacchi di Sabbia over the past decade; the exhibition brings together a selection of books – mostly constructed for site-specific performances or for shows that have never been realized – offering the visitor a kind of handcrafted docu-film on the most significant stages of this research.

The project “Le parole e le mani” by the Bianco-Valente company is a participatory work that involved the entire community of Sansepolcro. The goal of the work is to create a new Palio for the Settembre Biturgense, a historical event held every year in the city. During the periods of artistic residencies, the duo had the opportunity to dialogue with citizens and meet the historic associations of Crossbowmen and Flag-throwers, and the Popular Theater Company. Starting from what was once the Palio della Balestra from the 1500s, Bianco-Valente’s project recreated a new banner representing the community of Sansepolcro, using everyday fabrics donated by citizens. The weave of the fabrics was unraveled by the Una Valle di Donne Association and rewoven together by the students of Giovagnoli Art High School. The new palio will be displayed during the upcoming September Biturgense and presented to the winners of the competition.

The project “The Words and the Hands” is curated by the art critic Pietro Gaglianò, developed with the support of Toscanaincontemporanea and Creative Living Lab, a call promoted by the General Directorate for Contemporary Creativity of the Ministry of Culture and with the mentorship of Roberto Ferrari, director of Museo Galileo – Institute and Museum of the History of Science in Florence.

I cercatori d’oro is a project curated by Pietro Gaglianò in collaboration with Chiara Mu, an Italian artist active between Rome and London, where she completed her studies with a Master’s degree in Fine Art at Chelsea College of Art and Design, and author of numerous actions on the relationship between art and the public sphere.

The project, conceived as an exercise of investigation and restitution in a performative key of the multiple cultural and relational identities expressed by the chosen territory, provided for the residency between Monterchi, Sansepolcro and Anghiari of the artist and 3 other artists under 35 active in Tuscany (+ one artist from the territory). The artists, in addition to Chiara Mu, were:

Chiara Mu led a workshop for the duration of the residency, Oct. 8-15, delving into the performative and relational practices inherent in the field of visual arts. The didactic course, which included physical and theoretical activities, brainstorming, and field practice, was intensive in nature and involved the full-time presence of the participants and culminated in a day of public presentation in the beautiful setting of the historic center of Monterchi.

An experimental format for learning about contemporary art: meetings in the square, outside conventional pedagogical schemes, based on the principle of mutual learning. “Nuova Didattica Popolare” was conceived in 2013 by Guilmi Art Project (an artist residency in the province of Chieti) for the art critic and curator Pietro Gaglianò, who in the setting of Sansepolcro will involve the inhabitants and audience of Kilowatt in an attempt to open a breach in the fortress of art knowledge, usually occupied by insiders.

Pietro Gaglianò (1975), art critic and curator, has explored the relationship between the aesthetics of power and individual freedoms, preferring the urban, architectural and social context as the scene of contemporary art practices.

“Adunanza” is a collective portrait of Sansepolcro and its community. Taking his cue from the iconography of “La Madonna della Misericordia” – which envelops and protects the faithful – artist Francesco Ciavaglioli collected hundreds of photos of the people of Sansepolcro, creating a collage of faces side by side on a backlit panel. Later, during the first days of Kilowatt Festival, with the collaboration of the townspeople, by applying translucent paper over this surface, Ciavaglioli will trace and color the faces one by one: a gesture of self-representation on the part of the community, which no longer manifests itself under the shelter of the Virgin’s golden mantle, but decides to expose itself, shining with its own light.

Project selected through a competition by an unprecedented mixed commission consisting of a practitioner (Ilaria Gianni, co-director of the Nomas Foundation in Rome), Kilowatt’s artistic director (Luca Ricci) and a group of 23 lay citizens. During a two-month residency, the artists completed a reinterpretation of votive shrines in collaboration with a group of Sansepolcro citizens. The installations were then placed in the streets of the historic center.

Kilow’Art 2013 | La neve di luglio
artist: Maria Teresa Zingarello (1985)
The artist proposes a collective action with 83 people, called to symbolically occupy the city’s main square. The action takes its cue from the Nazis’ demolition of the Berta Tower, once at the center of the square. The title alludes to the memories of some witnesses who, after the tower was torn down, said they saw “July snow,” because of the white dust raised by the collapse.

Kilow’Art 2012 | Happens Everyday
artist: Filippo Berta (1977)
The project consisted of two phases: a workshop culminating in the performance Happens Everyday and the artist’s solo exhibition. The performance involved twenty citizens of Sansepolcro: in a school classroom people simultaneously lift their desks, a gesture that alludes to a reversal of conventions. The effort soon proves to be in vain: the weight of the desk gets the better of the individuals, who are called to confront an action characterized by physical and psychological tension.

Kilow’Art 2011 | Momenti di trascurabile sacralità
Artists: Luan Bajraktari, Francesco Biccheri, Francesco Capponi, Francesco Ciavaglioli, Ivan Frenguelli, Elisa Fuso, Jacopo Gregori, Simona Moretti, Gabriella Napolitano, Valerio Niccacci
The exhibition saw the creation of a series of site-specific interventions inside the former church of Santa Chiara, a building whose historical stratification is its most fascinating element. Confronting the space of the church, the works are based on the interaction with the pre-existing structure, characterized by environmental dimensions.

The exhibiting artists form a technically heterogeneous but stylistically related collective from Bologna, with works ranging from painting to photography to video and audio installation.
The same spaces of the Santa Chiara Auditorium and Cloister host the exhibition of photographers Alessandro Banducci, Andrea D’Ambrosio and Paolo Lafratta.